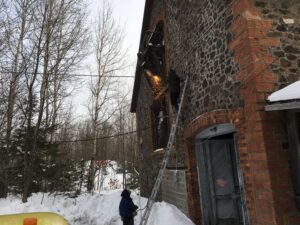 In 2019, we had one of the timber stations laid down due to the fact that the bases were rotten, causing it to just lean on the trees and pull on the face of the hoist house. To save the HH and prevent the stanchion from falling unexpectedly with people around, it was decided to lower it. All of it still remains for visitors to see. The rest of the winter was quiet.

One of the major projects undertaken this year was to remove the volunteer vegetation on site which was a perfect project for this year given the pandemic indoor restrictions. In July, we hired a landscaping company to remove all the trees and bushes that primarily laid between the shaft house and the hoist house. The goal was to not only protect the remaining structures that had been overtaken by the trees but to bring the site visually back to its mining days feel. We wanted to open up the line of sight that follows the cable between the hoist house and the shaft house. We have also found many artifacts out in the yard like rail ties, foundations, tools, metal cables, ceiling supports destined to be underground, and a lot more. With the site more opened up, we reevaluated the security of the property. In partnership with our neighbor, large boulders have been placed along one of the properties lines and a chain now bars the drive down to the hoist house. The site is free and open for pedestrians but we wanted to limit vehicle access. New gravel for the drive was also placed along with rip rap to help with erosion from rain runoff.

One of the important missions of PM&S is to not only preserve the physical buildings and landscape but also the information about the mine. Sadly, over the years, a block building housing documents and ledgers deteriorated causing severe water damage to the documents stored inside. Most were too severely damaged to even consider saving, but a few were not complete losses. These salvageable documents were removed from the mold filled building and taken down to the hoist house to lay out and dry. They remain there for the winter and more review of what is on the documents will continue next year. Most of it seems like mundane paperwork but there have been a couple gems. Inspired partly by the losses, there has been an effort launched to find important historical documents in our possession and start to digitize them so items aren’t truly lost. We have already identified a number of large format documents from the Captain’s office that are being scanned as well as a steady cycle of smaller ones. If anyone has any important Champion, Copper Range, or Painesdale documents or even stories that you would like to share with our archives, we encourage you to send scans or write ups along to us. We will keep everyone updated on our archiving progress.

Our long range plans include creating a plaque/wall to honor the miners who died in the mines, and restoring the shaft house, Captain’s office, and hoist house and opening them as a museum. 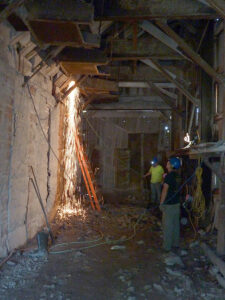 We have just completed a major project to strengthen six of the primary columns that support the hundreds of tons of machinery that remain in the shaft-rock house. The work was conducted by a skilled crew from REJ Contracting. The $22,000 project took about four weeks to complete.
Making the support column repairs a priority was based on the results of the 2018 Structural Survey by George Kiiskila (UP Engineering). It was recommended that 4-5 foot sections of six support columns be strengthened with new steel. These sections of the columns were buried in damp rock dust. The corrosion to the steel was significant enough to threaten the structure’s ability to support the crushing machinery still in the shaft-rock house above.Before work on the columns could begin the two ore bins (North and South Chambers) located below the crushers needed to be mucked out. This job took four men four days to complete.
The bottom of the bins contained over 200 cubic yards of rock dust which had accumulated over the 65 years that the mine was in operation. Workers reported that this compacted dust was “as hard as concrete” and very difficult to break up.
Adams Township allowed us to tap into a nearby fire hydrant. The powerful water stream allowed workers to flush the muck down the ore chutes. Once the area around the base of the support columns was cleared, repair work could begin.
First the rotten steel was ground down to a fresh metal surface. Next 400 pounds of new 3/4” plate steel was welded onto what remained of the old steel. A rebar web was then welded to the base area of the new steel. This steel would transfer the load from the column to the concrete poured in the next step. In the final step concrete was poured around the base of the column. This concrete sits on the original massive foundation under the shaft-rock house.
The weight of the crushing machinery is now safely supported by good steel on a solid foundation.

A new door has also been installed on the Captain’s office.

REJ Contracting worked to provide safe access to the upper reaches of the mineshaft for a structural engineering study (completed by George Kiiskila of UP Engineers and Architects. REJ Contracting also buttoned up problem leaking areas of the mineshaft roofing, secured the lower corrugated metal perimeters of the shaft where intruders were making their own access to the shaft, replaced sections of the sheathing as needed and secured the loose sheathing at the top of the headframe, covering the window way up there, to prevent the piece of metal becoming a projectile in high winds. A man door to the shaft house was also secured.

The floor of the mineshaft was leveled with poor rock from the poor rock pile nearby. The extra poor rock was used outside to make a smoother walking access over the rather steep drop to the lower level of the mineshaft/rockhouse with a handrail installed for safety. In addition, broken windows were replaced with plexiglass.

We also repaired the roof on the Captain’s office. 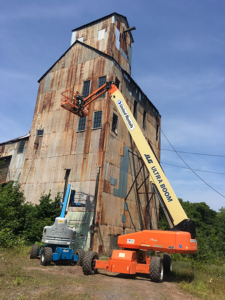 Safety of the shaft house, over the years, has been an ongoing concern. Until this fall, the materials car, estimated as weighing 2-3 tons, was still suspended from the gantry in the shaft house. Hanging by a heavy duty iron link chain, it was a possible safety hazard due to deterioration of the supporting gantry structure over the years of non-use and exposure to the forces of nature/weather/moisture. The Houghton County Mine Inspector recommended alleviating this concern by either building a supporting structure underneath the car, or letting it down to reside on its back in the shaft house on a support made from pressure treated timbers. Proceeding with further work planned in the shaft house, depended first on the alleviation of the materials car safety problem. After carefully considering all suggestions and options for this project, it was decided that the best decision for safety and preservation was to lower the car. 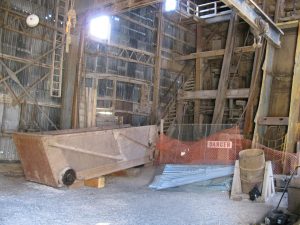 We are excited to announce that we have made the Captain’s office handicap accessible. We now have a concrete parking area on the side of the building with a ramp going to the back of the building to accommodate a wheelchair. The front of the building was not an option, as that entrance is not as close to the ground and there is a small shed attached to the building which would be difficult to maneuver a wheel chair.

Painesdale Mine & Shaft, Inc. is pleased to announce that we have completed phase 4 of the Save Our Shaft House project. We have recently restored the windows of the shaft house to their original condition. We have also repaired/replaced the steps going to the Captain’s office. 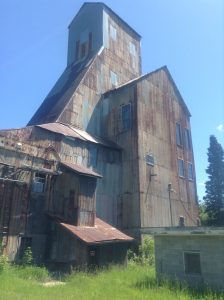 In the late 1990’s, the main waterline from Painesdale to Hancock burst somewhere in the vicinity of  Champion #4. As a result, the middle columns of the shaft house settled 8-12 inches. A settlement study has been done in order to find out if there is ongoing settling of the shaft house from that event. 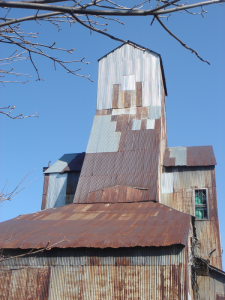 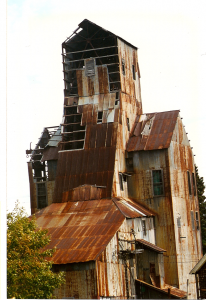